With the start of Dhul-Hijjah less than a week away, Muslims all over the world are preparing to embark on a journey of a lifetime. However, if you are among those who will instead be watching them on TV and wishing you were with them, you must be asking yourself: What do I do during these days? 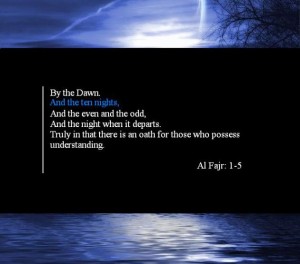 There are no days during which the righteous action is so pleasing to Allah than these days.

Let us remind ourselves of some specific and other general deeds which will in sha’ Allah maximize our benefit from the best of all days!

The Superiority of These Days

The immense importance of these days is shown by the fact that Allah (Exalted be He) swears an oath by them in the Qur’an: “By the dawn; And (by) ten nights.” (Al-Fajr 89:1-2)

In Tafsir Ibn Kathir it is mentioned that the “ten nights” in the verse above refer to the first ten days of Dhul-Hijjah.

Also, the Prophet (peace and blessings be upon him) said:

The reason righteous deeds are more rewarding during these days, according to Hafiz Salahuddin Yusuf, is because they are Hajj days in the sacred season of pilgrimage. Because of their excellence and importance, Allah (Glorified and Exalted be He) swore by them.

So what can you do to honor these days?

1- Take Special Care of Your Obligations

Before talking about any voluntary actions (and bonuses), it is important to remind ourselves that we must first take care of all our obligations. How can we think of building and beautifying a house without constructing its pillars? Thus, we have to pay special attention to the pillars of Islam and strive to perfect our obligations.

a- Pray on time (and in congregation, for men)

The Messenger of Allah said, “Verily, between a man (i.e., a Muslim) and between shirk (polytheism) and kufr (disbelief) is the abandoning of As-Salah (prayers).” (Muslim)

b- Give your zakat if it is due!

c- If you have not yet fulfilled the obligation of Hajj, make special du`aa’ to Allah to grant you the opportunity to do so soon and in the best of manners.

2- Supplicate for Sighting of the New Moon

Start the month with this supplication:

‘Allah is the Most Great. O Allah, bring us the new moon with security and Faith, with peace and in Islam, and in harmony with what our Lord loves and what pleases Him. Our Lord and your Lord is Allah.’ (Fortress of the Muslim)

These remembrances have a special connection to these ten days:

Our Prophet said: “There are no days that are greater before Allah or in which good deeds are more beloved to Him, than these ten days, so recite a great deal of tahleel (saying La ilaaha illa Allah, here’s no god but Allah), takbir (saying Allahu Akbar, Allah is Greatest) and tahmeed (saying Alhamdulillah, all praise be to Allah) during them.” (Ahmad)

The Companions would go to the marketplace and recite the takbir out loud and people would also recite after hearing them. Let us follow their footsteps and encourage others to recite the takbir as well, as an act of worship and a proclamation of the greatness of Allah (Exalted be He)! You might find it uncomfortable to constantly remind your family members, but if you simply play an audio file from your laptop, mobile, etc., you’ll notice others will join in with the recitation naturally, in sha’ Allah.

One of the forms of takbir you may recite is:

After the fasting of Ramadan whose main purpose was “…that you may become righteous” (Al-Baqarah 2:183), Allah makes a special connection between sacrificing animals (which has to be offered on the days of `Eid) with taqwa:

Their meat will not reach Allah, nor will their blood, but what reaches Him is piety from you. (Al-Hajj 22:37)

Thus, let us repent from all our sins and try our level best to attain taqwa.

5- Earn the Reward of a Hajj without Going to Makkah

Prophet Muhammad said: “Whoever prays Fajr in congregation, then sits remembering Allah until the sun has risen, then he prays two rak`ahs, then for him is the reward like that of a Hajj and `Umrah.” He said: “The Messenger of Allah said: ‘Complete, complete, complete.’” (At-Tirmidhi)

That’s a small deed with such an immense reward! Allahu Akbar! However, this would not mean that you will be free from the obligation of Hajj (the fifth pillar of Islam) of course.

Allah’s Messenger (peace be upon him) said: “Allah says: ‘(The person observing sawm) has abstained from food and drink, and sexual pleasures for My sake; fasting is for Me, and I will bestow its reward. Every good deed has ten times its reward.’” (Al-Bukhari)

In addition, the Messenger of Allah said:

“Whoever observes fast for a day in the way of Allah (non-obligatory fasting observed for the sole purpose of pleasing Allah and seeking His blessings), Allah will remove his face from the Hell to the extent of seventy years’ distance.” (Muslim)

So imagine the reward for keeping fasts during these grand days, In sha’ Allah! This applies only for the first nine days. The 10th of Dhul-Hijjah will be `Eid, in which fasting is prohibited.