What does it mean to believe in Allah?

Belief in His Servitude

We know and have full conviction that Allah alone is the true deity Who has no partners and that He alone is the One who deserves to be worshiped. So He is the Lord of the worlds, and we worship Him with what He has legislated with complete humbleness, love and reverence for Him. 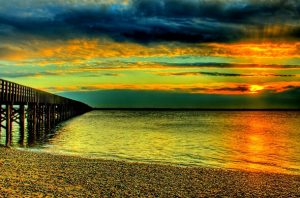 We have full conviction that to Allah alone belong the most beautiful Names and lofty Attributes.

Just as we have humbled to His Lordship in creation and maintenance, we must humble to His servitude in commandment and legislation.

And your god is one God. There is no deity worthy of worship except Him, the Entirely Merciful, the Especially Merciful. (Al-Baqarah 2:163)

So Allah (Exalted be He) is the true deity, and the servitude of anything worshiped other than Him is false, as well as their worship:

Belief in His Names and Attributes

This means understanding, memorizing and acknowledging them, using them as a means of worshipping ah and acting in accordance to them.

Knowledge of the Attributes pertaining to mercy, beneficence, kindness and generosity, fill the hearts with love of Allah, as well as desire and craving for Allah’s bounties, kindness and generosity. Knowledge of the Attributes pertaining to knowledge and encompassment necessitate for the slave to be aware of Allah’s constant observance of him in all his movements and situations.

Finally, knowledge of all these attributes necessitate for the slave to have reverence, love, desire, delight, reliance and nearness to Him by worship of Him alone without any partner.

* We also affirm for Allah what He has affirmed for Himself or what His Messenger (peace be upon him) has affirmed for Him in regards to His most beautiful Names and lofty Attributes. Likewise, we negate from Him what He has negated from Himself or what His Messenger negated from Him. We also believe in Allah’s Names and Attributes, and that which they indicate of meanings and effects. So, for example, we believe that Allah is the Most Merciful. This means that He is the possessor of mercy. From the effects of this name is that He has mercy upon whom He wills. And the same can be said with the rest of His Names and Attributes.

We affirm all of that for Him in a manner that is befitting to His Majesty, without changing their meaning, without negating them, without specifying the exact nature of them and without resembling them to the creation, based on what He says:

* We further know and have full conviction that to Allah alone belong the most beautiful Names and lofty Attributes, and we invoke Him with them:

And to Allah belong the best names, so invoke Him by them. And leave (the company of) those who practice deviation concerning His names. They will be recompensed for what they have been doing. (Al-A`raf 7:180)

2– And Abu Hurayrah (may Allah be pleased with him) narrated:

The Messenger of Allah (peace be upon him) said, “Allah has ninety-nine names, i.e. one-hundred minus one; whoever enumerates them will go to Paradise.” (Al-Bukhari and Muslim)

Fundamental Principles of Belief in Allah’s Names and Attributes

Belief in Allah’s Names and Attributes are built upon three fundamental principles:

The first: Exalting the Creator from any similarity to the creation in His Essence, Names, Attributes and Actions.

The article is an excerpt from the author’s book “Summarized Islamic Fiqh In Light of the Qur’an and Sunnah”, translated by Kamil Ahmad & Jawad Beg

The Prophet On Charity and Its Virtues