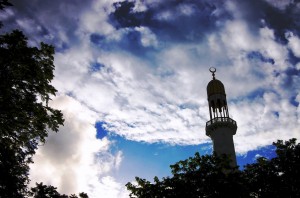 Man has taken many journeys throughout time. But there is one journey that nobody has ever taken. Nobody—except one.

That commandment was Salah (Prayer). When the Prophet was first given the command to pray, it was to be fifty times in a day. After asking Allah to make it easier, the commandment was eventually reduced to five times a day, with the reward of the fifty.

Reflecting upon this incident, scholars have explained that the process of going from fifty to five was a deliberate one, intended to teach us the true place Prayer should hold in our lives. Imagine for a moment actually praying fifty times a day. Would we be able to do anything else but pray? No. And that’s the point. What greater way than that to illustrate our life’s true purpose? As if to say, Prayer is our real life; all the rest that we fill our day with… just motions.

And yet, we live as if it’s exactly the opposite. Prayer is something we squeeze into our day, when we find time—if that. Our ‘lives’ don’t revolve around Prayer. Prayer revolves around our ‘lives.’ If we are in class, Prayer is an afterthought. If we are at the mall, the Macy’s sale is more urgent. Something is seriously wrong when we put aside the very purpose of our existence in order to watch a basketball game.

Imagine an act so egregious that the Prophet would speak about it in such a way. Consider for a moment what Satan did wrong. He didn’t refuse to believe in Allah. He refused to make one prostration. Just one. Imagine all the prostrations we refuse to make.

Consider the seriousness of such a refusal. And yet, think how lightly we take the matter of Prayer. Prayer is the first thing we will be asked about on the Day of Judgment, and yet it is the last thing that is on our mind. The Prophet said: “The first thing which will be judged among a man’s deeds on the Day of Resurrection is the Prayer. If this is in good order, then he will succeed and prosper, but if it is defective, then he will fail and will be a loser.” (At-Tirmidhi)

On that Day, the people of Paradise will ask those who have entered Hell-fire, why they have entered it. And the Qur’an tells us exactly what their first response will be:

Why is it that if we are in class or at work or fast asleep at the time of Fajr and we need to use the restroom, we make time for that?

In fact, the question almost sounds absurd. We don’t even consider it an option not to. And even if we were taking the most important exam of our lives, when we need to go, we will go. Why? Because the potentially mortifying consequences of not going, makes it a non-option.

There are many people who say they don’t have time to pray at work or school, or while they are out. But how many have ever said they don’t have time to go to the bathroom, so while out, at work or school have opted instead to just wear Depends? How many of us just don’t feel like waking up at Fajr time if we need to use the bathroom, and choose instead to wet our bed? The truth is we’ll get out of bed, or leave class, or stop work, to use the bathroom, but not to pray.

It sounds comical, but the truth is we put the needs of our body above the needs of our soul. We feed our bodies, because if we didn’t, we’d die. But so many of us starve our souls, forgetting that if we are not praying, our soul is dead. And ironically, the body that we tend to is only temporary, while the soul that we neglect is eternal.

Yasmin Mogahed received her Bachelors in psychology from the University of Wisconsin-Madison and her Masters in Journalism/Mass Communications from UW -Madison. Yasmin is a freelance writer, whose work has appeared in publications around the world. She is currently a writing instructor at Cardinal Stritch University and a Youth Director for the Islamic Society of Milwaukee.

Everything about Combining Prayers

A Beginners Guide to Prayer in Islam