Born to Christian but not especially religious families, Hanan Sandercock and her husband John Smith became Muslims as adults in Wales.

They celebrate Eid and not Christmas, pray five times a day, and don’t eat pork or drink alcohol. Hanan, 51, has worn a scarf for 23 years since converting aged 28 and raised all her four children in the faith.

Both say they felt a sense of relief and fufilment converting. They describe it as finding a community as well as a faith and finding answers to questions they’d been asking. 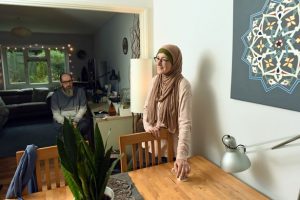 Artist and play worker Hanan Sandercock has decorated the family home in Pentwyn with copies of ancient Islamic tile designs. She is pictured with husband John Smith

Searching for the meaning of life

While their families supported their choice some of Hanan’s friends drifted away when she became a Muslim in 1995.

Then Donna Sandercock, she arrived in Cardiff in the early 1990s as a young art school graduate looking for work.

“I was in my 20s and I think I was searching. I wanted to know the meaning of life. I went to a Buddhist meeting but that didn’t do anything for me.”

With Cardiff beginning to shake off the grey days of the 1970s and ’80s Donna, originally from a small village in Cornwall, was intrigued to be in a city with a historically multicultural population. She got to know and befriend young Muslims her age working and socialising.

“I was interested. Their religion was very important to them. They were solid and had a belief system I didn’t have.

“I’d eat at their houses and have the nicest food. They were really open and welcoming and happy I was interested.”

If we got our safely I’d become a Muslim

In the summer of 1994 visiting a kibbutz in Palestine she also learned more about Palestinian and Muslim history and culture and had a religious experience which led her to convert to Islam when she returned to Cardiff.

“I was walking in a wadi, a deep ravine, in the heat of the day with a friend and we got lost,” she said. “There were no mobile phones then and we had run out of water. I prayed in a way I’d never done before. I prayed that if we got our safely I’d become a Muslim. It wasn’t something I’d vocalised before but realised it had been inside me.”

Back in Wales she “read and read about Islam” and spoke to a Yemeni  friend “who kept asking me if I was sure” before converting at the South Wales Islamic Centre in Butetown.

The well-known late Imam Sheikh Said, whose own mother was a Welsh Muslim convert, listened as Donna changed her name to Hanan and recited the Shahada, the declaration of belief in the oneness of God and the acceptance of Muhammad as his prophet. 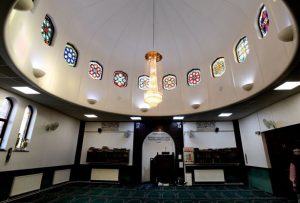 “I immediately felt a great sense of relief,” she said. “Islam explains things to me. The answers are all there.

“I became part of a diverse community. I was not pressured to be or become a particular way.

“I wore an abayah. Being Muslim is an identity and I wanted to show that.”

Marrying an Algerian Muslim in Cardiff Hanan had four children, now aged 22, 21, 14 and 10, but later divorced.

And within a few years world events led her to stop wearing her robe robe because she was scared of being attacked. When 9/11 happened the whole landscape changed.

Although Hanan had been shouted at and had things thrown at her by men in cars in 1990s Cardiff, it was only when the Twin Towers were attacked in 2001 that she began to feel seriously at risk.

“I stopped wearing the abayah (robe) after 9/11. I knew some Muslim women had been attacked in the UK and America. I had little children and didn’t want us to be at risk. I carried on wearing the scarf but not the abayah.”

At the same time a few miles down the road 35 year-old John Smith was seeking out Muslims but for different reasons. 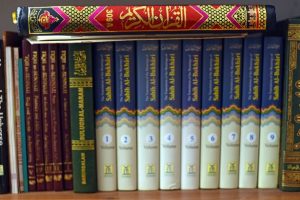 John and Hanan’s bookcase is filled with books about Islam

Born in Omagh, northern Ireland, to a Protestant Irish mother and English army father, John was living in Pontypridd when the September 11 attacks happened in 2001.

“9/11 led to me converting to Islam,” he said as he recalled not so much a search for faith as a bolt out of the blue.

“I met a University of South Wales (USW) student who was Muslim and asked him: ‘How could Muslims do this? Where’s the rationale?’

“He told me the people who carried out the attacks had Muslim names but were not Muslims. He gave me a copy of the Quran.”

After reading the holy book John attended a lecture tour by a Muslim cleric and converted.

“I converted before I really found out about Islam. Saying the Shahada is a declaration. You have to take it slowly and really want to do it.

“Being Muslim for me means having a sense of family.

As there is no mosque in Pontypridd John prayed at the prayer facility at USW. Although he wasn’t a student the room is open to the community. Now living in Cardiff he visits the Al Manar and Dar Ul-Isra mosques. Like Hanan he prays in Arabic.

The couple, who met through a friend in 2017 and married the same year, are horrified by extremism in any part of the Muslim or non-Muslim community.

“Extremist Muslims are the bane of our lives because it’s always those that make the headlines,” said John.

“They almost become the public face of Islam which is really difficult when you when you are living as a Muslim and it colours peoples’ judgement.”

Hanan has witnessed a child’s headscarf being snatched off her head in Roath Park by a teenager on a bike, knows people who have been insulted regularly in the street, and has herself been insulted and had liquid thrown at her from a car in the 1990s.

She is impatient with those who won’t adapt and celebrate diversity, saying she is proud to be a white “British Muslim”. She disagrees with the Salafi Muslim view that Muslims should not take part in Western democracy by voting and is frustrated by non-Muslim friends and acquaintances who turn up with bottles of alcohol or argue about the custom of not celebrating birthdays.

Both say they have been very lucky with their families accepting and embracing their change of religion and lifestyle.

Hanan’s younger sister Lisa also converted and their parents moved to Cardiff and enjoy celebrating Eid with their grandchildren, all of whom are Muslim.

Both Hanan and John feel it is vital to talk about their faith to counter ignorance.

Hanan, a play leader at the Steiner School in Cardiff, said she works and teaches with people who are Christian, Jewish, Muslim, Pagan and of no religion.

Her younger children attend the school and she likes that it is a place where discussion is easy and differences are accepted. She regrets this is not the case everywhere but said she and her family are happy to be who they are and say so.

“I am British Muslim and happy to be. At first when you convert you are shy and embarrassed. But I even make halal pasties now.

Source: walesonline.co.uk with some modifications