It is very important for Muslims to read the Qur’an and get a better understanding of its message. This is how we can learn and practice the basic concepts of Islam as a balanced way of life. 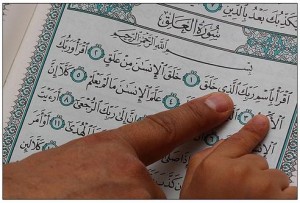 The first word of the Qur’an revealed to Prophet Muhammad was “Read”.

Reading the Qur’an also shows us the universe in a new light: we learn many amazing facts about ourselves and the different creatures of God, the environmental balance and our role in it, human behavior and relations, financial and economic concepts, and much, much more.

In other words, when we read the Qur’an we must free our minds and open up our souls to get a much deeper understanding of our world and ourselves. It is not just a book of worship and religious rules; it is a book of wisdom that will change our lives.

Here are some general guidelines on how to read the Qur’an:

“There is no end rhyme, nor is the Qur’an written in verse. The prose, however, is so unique that one can detect a law of verbal architecture that governs its internal music pattern. It remains impossible to imitate the structural and rhetorical brilliance of the Qur’an”.

2- Listen to a recitation of the Qur’an from an experienced reader, even if you don’t understand. It is important to get the feeling of the original text, and it is mesmerizing to hear its unusual music.

3- If this is your first encounter with the Qur’an, plan two consecutive readings: a first quick and general reading to get the big ideas, then a second more thorough reading to delve deeper and get a much closer look at the details.

4- Start your first reading with a neutral frame of mind. Approaching the Qur’an with a pre-conceived perception will only slow your progress and color your understanding of its true message, resulting in a confused impression.

Consult your own open heart and mind in the first reading, and not other people’s opinions, whether from classical books or from the mainstream media. The Qur’an reaches straight into your soul if you let it, so please allow yourself the experience.

“The Qur’an speaks the language of the human heart wherever humans are found and whatever the age they live in; it is a universal language rooted deep in a human’s natural constitution”.

5- Do not be afraid to challenge what you read. The Qur’an actually invites the reader to do just that, as long as you diligently and earnestly try to find the answers, because in the process, you end up re-discovering your true self.

This rewarding journey of mental and spiritual growth is described in the works of many prominent western Muslims such as American Professor of mathematics Jeffrey Lang, who was challenging the Qur’an as a fierce atheist, yet couldn’t help but surrender to it eventually (Struggling to Surrender, Amana Publications), he writes of his first reading:

“You cannot simply read the Qur’an, not if you take it seriously. You either have surrendered to it already or you fight it. It attacks tenaciously, directly, personally; it debates, criticizes, shames, and challenges. From the outset it draws the line of battle, and I was on the other side. I was at a severe disadvantage, for it became clear that the Author knew me better than I knew myself. The Qur’an was always way ahead of my thinking; it was erasing barriers I had built years ago and was addressing my queries”.

6- Allow yourself time to contemplate. Don’t read the Qur’an like you read the newspaper, rather, read it as a direct message from God Himself to you in particular! When you read verses where God talks to the reader, stop and let the message sink in, then allow yourself time to think of yourself and your life in relation to this divine communication, think of how you could put it to good use to adjust your convictions and behavior.

When you read stories about previous nations, find contemporary parallels and try to learn the lessons. When you read about God’s magnificent creations, think of educating yourself about nature and showing gratitude to Him through respecting life and natural resources. Think of the Qur’an as a dialogue or a conversation rather than a one-way communication of do’s and don’ts. Be brave enough to provide the honest answers to the questions your heart and mind will throw at you while you read.

7- Get additional insights from trusted sources about the Qur’an’s message from different perspectives: scientific, sociological, behavioral, regulatory…etc. in addition to reading about the historic context in which it was revealed, including the biography of the man who transmitted it to us: Prophet Muhammad (peace be upon him) and his companions.

I advise you to read original writings from fellow Muslims of your native culture, rather than translated works from Arabic, with the exception of a few outstanding works (for example, Dr. Mostafa Mahmoud’s book Understanding the Qur’an, a Contemporary Approach, translated by Dr. M Enani- Amana Publications).

Read also about the brilliant achievements of Muslim scientists across history, when they understood and applied the Qur’anic rules of acquiring and applying knowledge to serve humanity as God’s vicegerents on Earth.

8- Plan to read the Qur’an in its original language one day by learning Arabic, and the science of the correct recitation of the Qur’an called ‘tajweed‘. There are lessons in all the mosques in the world, and there are transliterated Qur’ans especially for this purpose, to help you pronounce correctly, and many new Muslims have excelled at this and teach others, you can easily find their sites through a simple online search.

The experience is unparalleled if you allow yourself to absorb it in full. In his book “The Amazing Qur’an“, Dr. Garry Miller writes:

“Calling the Qur’an amazing is not something done only by Muslims, who have an appreciation for the book, and who are pleased with it; it has been labeled amazing by non-Muslims as well. In fact, even people who hate Islam very much have still called it amazing”.

Dr. Miller then explains his surprise as a scientist during his first reading:

“Within the last century the scientific community has demanded a test of falsification for any new scientific theory. This is exactly what the Qur’an has. Basically it states, “If this book is not what it claims to be, then all you have to do is this or this or this to prove that it is false.” Honestly, I was very surprised when I first discovered this challenge. In 4:82 the book openly invites the non-Muslim to find a mistake. In 1400 years no one has been able to do that, and thus it is considered true and authentic”.

Sahar El-Nadi is an Egyptian freelance journalist who traveled to 25 countries around the world and currently based in Cairo. Sahar also worked in many people-related careers in parallel, including presenting public events and TV programs; instructing training courses in communication skills; cross cultural issues; image consulting for public speakers; orientation for first-time visitors to the Middle East; and localization consulting for international educational projects.