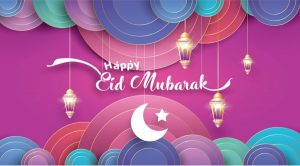 `Eid al-Fitr (festival of fast-breaking) and `Eid al-Ad-ha (festival of sacrifice) are the two main festivals in Islam.

There are certain acts of worship and recommendable things that Muslims should observe on those days to express their gratitude to Allah.  Among these acts of worship is the ‘Eid prayer. Allah says,

The Legal Ruling Regarding the `Eid Prayer

This means that every Muslim must perform it. This is the opinion of Imam Abu Hanifah and Ibn Taimiyah. They quoted the following Hadith to support their opinion:

Umm ‘Atiyya reported: The Messenger of Allah (ﷺ) commanded us to bring out on `Eid al-Fitr (festival of fast-breaking) and `Eid al-Ad-ha (festival of sacrifice) young women, menstruating women and purdah-observing ladies, menstruating women kept back from prayer, but participated in goodness and supplication of the Muslims. I said: Messenger of Allah, one of us does not have an outer garment (to cover her face and body). He said: Let her sister cover her with her outer garment. (Al-Bukhari and Muslim)

They interpret the commandment in the hadith to mean obligation. Although it is not obligatory for women to perform the prayer in congregation, the Prophet (peace be upon him) ordered them to witness the `Eid prayer. This, in turn, means that it is obligatory for men.

This means that the `Eid prayer must be performed. Here, not every single person falls under the obligation but a group can perform the obligation on behalf of others.

This opinion is, however, not that strong. If the `Eid prayer is collectively obligatory, women won’t fall under the obligation which is in contradiction with the above mentioned Hadith.

If we take the following Hadith into consideration, we can understand the commandment in the above mentioned hadith to mean recommendation. This is the opinion of the majority of the scholars.

When to Perform the `Eid Prayer?

The `Eid prayer has the same time as Duha prayer. Duha means the morning sunshine. In the technical usage it refers to a specific time that starts about 10 or 15 minutes after the sunrise and finishes 10 or 15 minutes before the Dhuhr (noon) prayer or before it’s high noon i.e. when the sun starts to move from its highest point in the sky towards the direction of the sunset.

Where to Perform the `Eid Prayer?

The original legal ruling is that it is recommended to perform the `Eid prayer in the open, namely, outside mosques in a wide place. The Prophet (blessings and peace of Allah be upon him) and his Companions (may Allah be pleased with them) used to perform it in the desert.

Is It Allowed to Perform the `Eid Prayer at Home Due to Coronavirus COVID-19 Pandemic?

In their reply to this legal issue, AMJA Resident Fatwa Committee issued the following legal ruling:

The`Eid prayer is one of the obvious symbols of Islam. The scholars’ rulings on it vary, deeming it a communal obligation, an individual obligation, or at least a highly stressed sunnah.

Because that which is easy is not voided due to difficulty, so long as it is possible, even in the most stringent of circumstances, it should not be neglected.

Similar to the Jumu’ah (Friday) prayer, which is performed within its permitted framework, even if only by the masjid administration, so too should the `Eid prayer be performed.

The issue of performing the `Eid prayer at home for those who missed it in congregation is rather lenient.

While the khutbah is a condition of validity for Jumu’ah, it is a recommendation (not mandatory) for both `Eids. This is supported by the narration of ʿAbdullāh b. al-Sa’ib who said, “I attended the Eid with Allah’s Messenger (peace be upon him) and he said, ‘We are going to deliver a sermon, so whoever wants to sit for the sermon should sit, and whoever wants to leave should leave’.” Therefore, neither the khutbah nor listening to it is a requirement of the Eid prayer.

Because of that, the majority of the jurists, with the exception of the Hanafis, have declared it permissible to perform it at home for whoever missed it in congregation. It has been narrated on the authority of Anas (may Allah be pleased with him) that if he missed the `Eid prayer with the imam, he would gather his family and servants, and ʿAbdullāh b. Abi Utbah would lead them in two rak’at, making takbir.

Al-Muzani related from al-Shāfi’i (may Allah have mercy on him) in Mukhtasar al-Umm, that “the individual should pray both `Eids in their home, and so should the traveler, the bondservant, and the woman.”

According to the Malikis, al-Khurashy, a Maliki jurist, said, “It is recommended for whoever misses the `Eid prayer with the imam to pray it. Should that be done in a congregation or alone? There are two opinions” (summarized from Sharh al-Khurashi, 2/104).

Al-Mardawi, a Hanbali jurist, said in al-Insaf, “If they miss the prayer (meaning `Eid) it is recommended to make it up in the manner it is normally prayed (just as the imam prays it).”

The fatwa of the Permanent Committee in Saudi Arabia is based on this.

There is also nothing wrong with listening to a sermon on TV, online, and so on, after performing the `Eidprayer at home, either alone or in a private congregation, as a general reminder; because general reminders are permitted regardless of the time or setting.

How to Perform the `Eid Prayer?

The `Eid Prayer is two rak’ahs (units of prayer).

First, you make the intention in your heart for the `Eid Prayer.

Second, while facing the Qibla (direction of the Ka`bah), start your prayer with the Opening Takbir (saying Allahu Akbar).

(O Allah! Set me apart from my sins (faults) as the East and West are set apart from each other and clean me from sins as a white garment is cleaned of dirt (after thorough washing). O Allah! Wash off my sins with water, snow and hail.)”

Fifth, recite Surat Al-Fatihah (the Opening chapter of the Quran), then Surat Al-A’la (The Most High).

Six, complete the first rak’ah as you do in your usual prayer i.e. to perform ruku’ (bowing) and sujud (prostration two times) then stand up for the second rak’ah while saying Allahu Akbar.

Ninth, Complete the `Eid Prayer as you do in usual prayer.

Some Recommended Acts of the Day of `Eid

On `Eid al-Fitr, it is recommended to eat dates or something else if there are not any dates before performing the prayer. This shows how obedient Muslims are in hastening to fulfill Allah’s commands by breaking the fast.

Narrated Anas bin Malik: Allah’s Messenger (ﷺ) never proceeded (for the prayer) on the Day of `Eid al-Fitr unless he had eaten some dates. Anas also narrated: The Prophet (ﷺ) used to eat odd number of dates.

2. Reciting Takbir in a Loud Voice

‘Extol God’ means to say takbir. The majority of scholars are of the opinion that the time for takbir on `Eid al-Fitr starts from after the dawn prayer until the time for performing the `Eid prayer. Others say that it starts immediately after seeing the new moon of the month of Shawwal.

There are many forms of takbir. The following is one of the most famous:

People may offer congratulations through phone calls and messages, etc. Different expressions can be used here such as ‘may Allah accept our and your good deeds’ or `Eid Mubarak’ (I wish you a blessed `Eid), etc.

The Ruling on Praying Jumuah through Broadcast

The Fiqh of Fasting: Essential Elements of Fasting – Part 2