Three of the non-Arabs that accepted Islam in the very early days of the mission of Prophet Muhammad, may the mercy and blessings of God be upon him, stand out.  They were Salman from Persia, Bilal ibn Rabah, whose heritage was Abyssinian, and Shuaib, known as the Roman.  These three men were among Prophet Muhammad’s close companions, they readily recognized Islam as the truth, and gave the fledgling religion a foretaste of the worldwide acceptance it would enjoy.  Prophet Muhammad is said to have predicted the spread of Islam by describing them as the forerunners of their respective ethnic groups; Suhaib from Romans, Bilal from the Abyssinians, and Salman from the Persians. 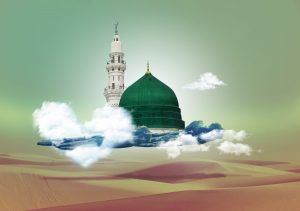 In the beginning of Islam, the fledgling Muslims could not worship openly or comfortably.  Arqam’s house was selected as a place where they could meet, pray and learn about Islam.

Suhaib was the son of a man who ruled an outlying province of the Persian Empire in the area now known as Iraq.  He was, by all accounts, a fun-loving, well educated, and intelligent little boy.  One day, when attending a picnic with his mother and other women and children, their party was attacked by Byzantine raiders who captured many slaves.  The blonde blue-eyed little boy Suhaib spent his boyhood and youth being traded as a possession.  However, his owners all recognized his intelligence and his education continued.  He was soon fluent in Greek, the dominant language of the Eastern Roman Empire and had acquired excellent trading skills.

The Pursuit of a Meaningful Life

Although Suhaib adopted the Byzantine customs and lifestyle he never felt completely at ease in the decadent empire and was later heard to remark that, “A society like this (Byzantine Empire) can only be purified with a deluge.” In his young adulthood Suhaib found out of the Byzantine empire and arrived in Mecca as a skilled merchant.   The stories of his return to his homeland differ.  Some say that he escaped with a significant amount of wealth and started a trading partnership with Abdullah ibn Judan.  Others believe that he was eventually sold to Abdullah ibn Judan, who recognized his skills and emancipated him.  No matter what manner is correct Suhaib did prosper and become very rich.  However, the prevailing idolatry and depravity of Mecca overshadowed his success and brought him no peace of mind.  His search for meaning in his life eventually brought him to the House of Arqam.

In the beginning of Islam, the fledgling Muslims could not worship openly or comfortably.  Arqam’s house was selected as a place where they could meet, pray and learn about Islam.  The house could be entered and exited secretly and it was in a narrow street that could be seen from within.

It is narrated that Ammar said, “I met Suhaib ibn Sinan at the doorstep of Arqam’s house when the Messenger of Allah was there.  I said, ‘What do you want?’ He asked me in turn, ‘and what do you want?’  I said I would like to speak with Prophet Mohammad and listen to his message.  He said that he would like to do the same.  Then we entered together the house and he (the Prophet) introduced us to Islam and we both accepted it.  We remained in the house for the rest of the day and left secretly in the darkness of the night.”[i]

Thus, Suhaib began his journey of piety.   It was not an easy period for him.  He was without family or tribal support and his wealth and new status as a free person did not save him from the abuses and persecution suffered by many new Muslims at the hands of the Meccan elite.  When Prophet Muhammad began to encourage his followers to migrate to Medina, Suhaib was keen to be among them.  Due to his wealth, the Meccan elite tried to prevent him, to the extent that they had guards watching over him and trying to foil any escapes.  Eventually he resorted to subterfuge.

Suhaib pretended to have a stomachache and went in and out of his house as if needing to repeatedly answer the call of nature.  The guards joked about his condition, got bored and fell asleep.  Suhaib took the opportunity to arm himself with a sword and a bow and galloped away from Mecca on his horse.  The guards arose from their stupor and gave chase, trapping Suhaib on a hill.  He stood there threatening to kill them all, but quickly changed tactics and decided to offer them money to allow him to escape.  The guards took up that offer and he continued on to Medina.

Suhaib was able to recoup the wealth he gave away to the guards and continued to be generous with his wealth, giving it away at every opportunity, even feeding the needy, the orphans or the captives.  Umar ibn al-Khattab once remarked, “Why are you nicknamed as Abu Yahya (father of John) when you don’t have a child? You say that you are an Arab when you are known as the Roman, and you feed people too much, I have seen you giving out so much food that you appear to be too extravagant.” Suhaib replied that he once heard Prophet Muhammad say “The best of you is the one who gives out food.”[iii]

Suhaib leads the Muslims in Prayer after Umar’s Death

Years later after Prophet Muhammad’s death, when Umar was the leader of the Muslim nation, Suhaib learned that he (Umar) had been stabbed.  He was unable to control his anger and grief and ran to Umar’s side weeping.  “Alas! my brother, Alas! my friend!”  Even as he was dying Umar said, “O Suhaib! Are you weeping for me when the Prophet said, “The dead person is tormented by some of the weeping of his relatives?”[iv]

Umar called six of his companions to decide among themselves who should succeed him.[v] He then assigned Suhaib to lead the Muslims in prayers and undertake the interim leadership of the Islamic nation.  Suhaib is known to have narrated more than thirty hadith and three of them can be found in Saheeh Muslim.

Suhaib ibn Sinan ar-Rumi died in Medina thirty-eight years after the migration, in 658 CE at approximately seventy years of age.  Sa’d ibn Abu Waqas led his funeral prayer, and he is buried in Jannat al-Baqi, the first Islamic cemetery established in Medina.

Source: islamreligion.com with some modifications