One of the amazing things that strike the reader of the Qur’an is its significant and multifaceted emphasis on the relationship of man to the environment. This is not merely about self, family and surroundings. It’s about the whole universe—heavens and earth—and all of Allah’s magnificent creation in them. 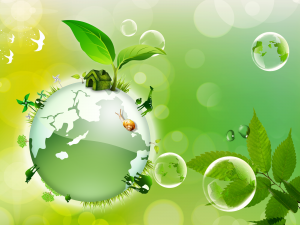 Man, literally in sum and substance, is of the environment. Thus he must feel and live in harmony with it

I’m talking about all the constituents of what some call “nature,” and down to the details, it’s geological foundations, waters, steady and violent shifts and movements, and its countless, varied forms of life and existence, and how it cycles and sustains them.

I know many scientists whom the Qur’an simply over-awed once they realized what it says about life, nature, and the universe. They were seized by the literally hundreds of Qur’anic verses that discuss and give guidance about the issues of the environment—all the ones we are suddenly talking about today, and plenty more that haven’t even come into view yet. What grabbed them was the realization that Allah Almighty clearly knew how abusive unguided man would be to his planetary home.

Just look at what we have brought upon ourselves and our innocent fellows in creation in but the last handful of decades. Perhaps this is why I too now find reading the Qur’an’s beautiful, moving, and harrowing “environmental” verses so spiritually and intellectually uplifting. God Says:

The creation of the heavens and earth is greater than the creation of mankind, but most of the people do not know. (Ghafir 40:57)

And there is no creature on [or within] the earth or bird that flies with its wings except [that they are] communities like you. We have not neglected in the Register a thing. Then unto their Lord they will be gathered. (Al-An`am 6:38)

In light of the unprecedented environmental crises we are facing today, I thought to speak to a bit of what Islam has to offer man to help him get the balance back in his life and restore his intimate and timeless relationship with creation. I call them Islam’s Five Environmental Commandments:

1- Man is Part of the Environment

Man, literally in sum and substance, is of the environment. Thus he must feel and live in harmony with it. Both man and his environment are the creation of the God—and both are worshippers of Him—with the technical exception that man has the will to refuse to worship and obey God willingly, though he does it unwillingly from moment to moment. God Says:

The seven heavens and the earth and whatever is in them exalt Him. And there is not a thing except that it exalts [Allah] by His praise, but you do not understand their [way of] exalting. Indeed, He is ever Forbearing and Forgiving. (Al-Israa’ 17:44)

And even though the earth and surroundings were created long before man, the end of both is virtually synchronous—the end of time—hence, the implicit benefit to man for leading an environmentally friendly lifestyle. A corollary of this determinant is that the environmental crisis is a human matter and cooperation on meeting its challenges should, therefore, not be hampered by religious or other differences.

2- Man Is Trustee of the Environment

And when your Lord said unto the angels: Lo! I am about to place a viceroy in the earth, they said: Will you place therein one who will do harm therein and will shed blood, while we, we hymn you praise and sanctify You? He said: Surely I know that which ye know not. (Al-Baqarah 2:30)

That makes him responsible to use the environment to achieve his God-given purpose in this life, with the condition that he maintains it for future generations, which have as much right to it as their predecessors. The Prophet (peace be upon him) said: “People (past and future generations included) share alike in water, air, and herbage.” (Abu Dawud)

3- Man Shall Be Fair to the Environment

Man cannot, and will not, fulfill or be true to his custodianship of the earth without creation-wide fairness. The Qur’an could not be more unequivocal when it comes to this principle. Man shall be fair in leading his life in this world because God created it in a balanced state. Should he fail, unwarranted injustice will lead to creation’s disruption and its inability to continue supporting man’s needs for a hospitable habitation. Read and ponder the import of these verses:

The sun and the moon [move] by precise calculation, and the stars and trees prostrate. And the heaven He raised and imposed the balance. That you not transgress within the balance. And establish weight in justice and do not make deficient the balance. (Ar-Rahman 55:5-9)

4- Man Shall Not Spread Mischief in the Land

Man must realize that God forbids harm, big and small, to one’s self and all others. The Prophet said: “There is no reason to) harm or reciprocate harm.” (Ibn Majah) And Allah says:

And cause not corruption upon the earth after its reformation. And invoke Him in fear and aspiration. Indeed, the mercy of Allah is near to the doers of good. (Al-A`raf 7:56)

Many scientists and activists believe that efforts to restore a healthy balance to the environment will never be achieved to any viable degree in the face of the unfathomable destruction of our wars of greed.

5- Man Shall Follow a Model of Moderation and Conservation

Most people do not grasp that much of the pollution comes from a culture of consumerism, whose primary effect is waste. It is unfortunate that people in the underdeveloped world, including Muslims, have embraced being consumers and wasters. The Qur’an is true in depicting this tendency of man, especially when resources become abundant. God Says:

Competition in (worldly) increase diverts you. Until you visit the graveyards. (At-Takathur 102:1-2)

But abundance does not justify wastage. God Almighty prohibits this. He Almighty says:

Indeed, the wasteful are brothers of the devils, and ever has Satan been to his Lord ungrateful. (Al-Israa’ 17:27)

Insatiable pursuit of increased materials combined with technological advancement has given some nations unprecedented control over man and his environment. But history tells us that these are signs that civilizations are doomed to perish.