After a few days, Muslims all over the world will be witnessing the best days a year. Out of Allah’s wisdom, He favors some of His creatures over others. Allah creates and chooses whatever He wills and does whatever He intends. A certain creature per se is not better than any other creature. It is Allah Who gives preference to some creatures over others through His inexhaustible wisdom. For instance, in the world of angels, the archangel Gabriel is the best of them. Prophets are the best of all humankind. The unrelenting Messengers of Resolve are the best among all prophets and messengers. This also applies to animals, inanimate objects, places, times, etc.

If we take a closer look at the shari’ah texts concerning time, we find out that the last one-third of night is the best time among all the other 24 hours. Friday is the best day a week. The month of Ramadan is the best of all months. Similarly, the first ten days of Dhul-Hijjah are the best days a year.

In his reply to this question, Shaikh al-Islam, Ibn Taimiyah said,

The nights are better in the last ten days of Ramadan because there is Lailat al-Qadr (the Night of Decree). On the other hand, the daylight is better in the first ten days of Dhul-hijjah because of the 9th day, the Day of Arafat, and the 10th day, Eid Al-Ad-ha. On these two days, Muslims perform most rites of Hajj (Pilgrimage).

The Virtues of the first ten days of Dhul-Hijjah:

1. Allah swears an oath by these days in the Gracious Quran.

“By the dawn, and the Ten Nights (of the Month of Pilgrimage)! By all that is even and all that is odd, and the night as it passes! Is there in this an oath (of sufficient proof) for whoever has a mind (that God is all-able to punish the ungodly)?” (Quran 89:1-5)

The majority of the commentators of the Gracious Quran hold the opinion that the “Ten Nights” refers the first ten days of Dhul-Hijjah. On the other hand, when Allah swears by something of His creatures, this denotes that such a thing is excellent.

2. These days are mentioned in the Gracious Quran as “the known days”.

…they may observe (many) benefits for themselves and mention (much) the name of God during the known days (of Hajj-Pilgrimage)… (Quran 22:28) 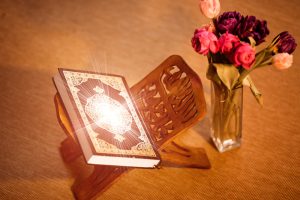 “There are no days during which the righteous action is so pleasing to Allah than these days (i.e., the first ten days of Dhul-Hijjah)

3. Some commentators of the Gracious Quran say that these days are also referred to in the following verse:

“Thereafter, We promised to Moses thirty nights (of retreat in Our presence at Mount Tur), and We completed them with ten (more).” (Quran 7:142)

4. Acts of worship performed during those days are better and more beloved than any other time of the year.

Ibn ‘Abbas (May Allah be pleased with them) reported:

5. The ten days are sacred as they are in the sacred month of Dhul-Hujjah.

What should a Muslim do to make the best use of these days?

These days are a great season of worship and a great opportunity every Muslim should seize. The truthful believer becomes more active in worship on these days. Here are some acts of worship Muslims can observe:

One of the best acts of worship to be observed during the first ten days of Dhul-Hijjah is spending a lot of time doing dhikr. In a mu’allaq (suspended) hadith mentioned by Al-Bukhari, he quotes Ibn ‘Abbas (may Allah be pleased with him) as saying,

Ibn ‘Abbas (may Allah be pleased with him) means by “the numbered days” to refer to the following verse:

“Ibn `Umar and Abu Hurairah (may Allah be pleased with them) used to go out in the marketplace during the first ten days of Dhul-Hijjah, reciting Takbir, and the people would recite Takbir when they heard them.” (Al-Bukhari)

Remembrance of Allah is one of the best purposes of worship. Thus, it is part of a lot of acts of worship including prayer, Friday speech, hajj, offering a sacrifice, etc.

Reciting the Gracious Quran is also part of doing dhikr which should be given full attention on these days. So, it is a good idea to specify a time for reciting or studying the Gracious Quran. There are a lot of proofs that indicate the excellence of reciting and reflecting on the Quran. Allah says,

Indeed, those who recite the Book of God, and who (duly) establish the Prayer, and who spend (charitably) from what We have provided them, secretly and openly- they have hope in a (blessed) transaction that shall never come to ruin- that He may give them their rewards (in full) and increase them evermore from His bounty. Indeed, He is all-forgiving, ever-thankful. (Quran 35:29-30)

When we say, “fasting on the first ten days” we mean only the first nine days which are allowed to fast because it is known that fasting on Eid al-Ad-ha (festival of sacrifice), on the 10th day of Dhul-Hijjah,  is prohibited.

Imam Al-Nawawi said that fasting these nine days is highly recommended especially the 9th day, the Day of ‘Arafat.

4. Fasting on the Day of ‘Arafat

As well as being the best day of the year, the Day of ‘Arafat is the day when Allah perfected the religion of Islam. Narrated ‘Umar bin Al-Khattab:

Once a Jew said to me, “O the chief of believers! There is a verse in your Holy Book which is read by all of you (Muslims), and had it been revealed to us, we would have taken that day (on which it was revealed) as a day of celebration.” ‘Umar bin Al-Khattab asked, “Which is that verse?” The Jew replied,

“This day I have perfected your religion For you, completed My favor upon you, And have chosen for you Islam as your religion.” (Quran 5:3)

‘Umar replied,”No doubt, we know when and where this verse was revealed to the Prophet. It was Friday and the Prophet (ﷺ) was standing at ‘Arafat (i.e. the Day of Hajj)” (Al-Bukhari and Muslim)

Secondly, fasting on this day expiates the sins of two years, the last and the coming one. This is mentioned in a hadith related by Muslim. However, it is recommended for pilgrims not to fast on that day out of emulation of Prophet Muhammad (peace and blessings of Allah be upon him). Not fasting will also give the pilgrim more energy to do a lot of dhikr and make du’aa (supplications to Allah)

Thirdly, ‘Aishah (May Allah be pleased with her) reported:

The Messenger of Allah (ﷺ) said, “There is no day on which Allah sets free more slaves from Hell than He does on the Day of ‘Arafah.” (Muslim)

There are a lot of other acts of worship a Muslim is recommended to observe. These include offering sacrifice (on the 10th, 11th 12th and 13th Day of Dhul-Hijjah), praying for Allah’s blessings upon the Prophet, giving to charity, being kind to parents, etc.