Allah, Exalted be He, says:

“It is He who made the sun a shining light and the moon a derived light and determined for it phases – that you may know the number of years and account [of time]. Allah has not created this except in truth. He details the signs for a people who know.” (Quran: Yunus: 5) 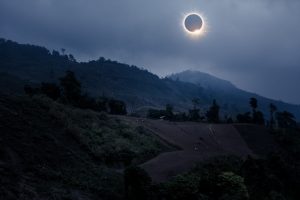 Eclipses are considered a kind of warning from Allah directed to people in order to make them turn to Allah in repentance and follow His right path.

The Legal Ruling and Evidence of the Eclipse Prayer

Eclipse is a sign amongst the signs of Allah, which He reveals to warn and alarm His servants. Allah says:

There was an eclipse in the lifetime of the Prophet (Allah bless him and grant him peace) and so he hurried to the mosque filled with fear. He led Muslims in prayer. Next, he told them that the eclipse is a sign amongst the signs of Allah by which He warns His servants. He also added that it might be the reason for a severe torment that might befall people.

Therefore, the Prophet (PBUH) ordered people to do acts that may eliminate it. That is, to perform prayer, supplicate, ask for Allah’s forgiveness, give charity, and other good deeds, so that people may be relieved.

Eclipses are considered a kind of warning from Allah directed to people in order to make them turn to Allah in repentance and follow His right path.

In the Pre-Islamic Period of Ignorance (the Jahiliyyah), people used to believe that the reason behind eclipses was due to the birth or death of a great person.

Therefore, the Messenger (PBUH) invalidated such beliefs and showed the Divine wisdom behind eclipses. On the authority of Abu Mas’ud Al-Ansari who said:

“There was an eclipse on the day when Ibrahim, the son of the Prophet (PBUH), died. So, people said that the sun had eclipsed due to the death of Ibrahim.

Therefore, the Prophet (PBUH) said, ‘The sun and the moon are two signs amongst the signs of Allah. They do not eclipse because of the death or life of somebody. So, when you see that, seek refuge with the remembrance of Allah and perform prayer.” (Al-Bukhari and Muslim)

In another narration, the Prophet (PBUH) says:

“Invoke Allah and perform prayer until the eclipse clears.” (Al-Bukhari and Muslim)

There is also a similar hadith related in Sahih Al-Bukhari on the authority of Abu Musa, saying:

“…when you see anything thereof resort to remembering Allah, invoking Him and asking for His forgiveness”

Hence, Allah causes eclipses of these two great signs, namely, the sun and moon. This is to let people take warning and know that the sun and moon are creatures, just like the other creatures, that may be afflicted with imperfection and change.

Thus, Allah does this to show His servants His sublime, perfect Might and to confirm that He is the Only One deserving worship. Allah says:

“And of His signs are the night and day and the sun and moon. Do not prostrate to the sun or to the moon, but prostrate to Allah, Who created them, if it should be Him that you worship.” (Quran: Fussilat: 37)

When to Perform the Eclipse Prayer?

As for the time of the Eclipse Prayer, it is to start from the beginning of the eclipse until it is clear. The Prophet (PBUH) says:

“When you see the eclipse, perform prayer.” (Al-Bukhari and Muslim)

It came in another hadith as:

“When you see any of this (i.e. eclipse), perform prayer until it dears.” (Muslim)

How to Perform the Eclipse Prayer?

According to the soundest opinion of scholars, Eclipse Prayer is to be performed with two rak’ahs (units of Prayer), in which one is to recite the Quran aloud.

As for the first rak’ah, one is to recite Al-Fatihah (the Opening Chapter of the Quran) and another long sura, such as the Sura of Al-Baqarah (the Cow) or any other long sura. Then, one is to perform a prolonged bowing, and raise one’s head and say tasmi’[i] and tahmid[ii] in the same way one does in other prayers.

Next, one is to recite Al-Fatihah and another long sura, but shorter than the first, such as the Sura of Al ‘Imran (the Family of ‘Imran).

After that, one is to perform a long bowing, but shorter than the first one, and raise one’s head and say tasmi’ and tahmid.

After saying so, one is to perform two prolonged prostrations and not to prolong sitting between them.

Then, one is to perform the second rak’ah similar to the first, namely with two prolonged bowings and two prolonged prostrations. Finally, one is to recite Tashahhud and say taslim[iii]. ‘A’ishah (may Allah be pleased with her) narrated:

“In the lifetime of Allah’s Messenger (Allah bless him and grant him peace), the sun eclipsed and he went to the mosque and the people aligned behind him. He pronounced takbir and prolonged the recitation (of the Quran) and then said takbir and performed a prolonged bowing; then he (lifted his head and) said, Allah listens to the one who praises Him.’ He then did not prostrate hut stood up and recited a prolonged recitation, but shorter than the first one. He again pronounced takbir, then performed a prolonged bowing, but shorter than the first one and then said (after rising from bowing), Allah listens to the one who praises Him, O our Lord! (All) praise is due to You! Then, he prostrated and then he did the same in the second rak ‘ah; thus he completed four bowings and four prostrations. The sun (eclipse) had cleared before he finished the prayer” (Related by Al-Bukhari and Muslim)

Delivering a Sermon after Prayer

Moreover, it is an act of the Sunnah, for the imam, to preach people after performing the Eclipse Prayer, and warn them against heedlessness with regard to Allah’s commands, and against unawareness. The imam should also command them to invoke Allah frequently and ask for His forgiveness. ‘A’ishah (may Allah be pleased with her) narrated:

“The Prophet (PBUH) came to the people, after the sun became visible again after the eclipse, and delivered a sermon…” (Al-Bukhari and Muslim)

If the prayer is finished before the eclipse is over, one is to resort to remembering and invoking Allah until it is over, and not to repeat prayer.

However, if the eclipse is clear during prayer, one is to complete it quickly and not to stop it straight away. as Allah, Exalted be He, says:

[i] Tasmi’: Saying “Sami’ Allah-u li-man hamidah” i.e. “Allah listens to the one who praises Him,” when standing following bowing in prayer.

[iii] Taslim: Saying the final salams in prayer (saying, “As-salam-u ‘alaikum wa rahmat-ullah” i.e. Peace and mercy of Allah be upon you) when concluding prayer.