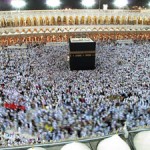 The Ka`bah was the focal point from where this preaching was spread across the world, and the worship rites of Hajj were introduced

It was in Makkah that Ibrahim and his son built the holy Ka`bah, the center of the Islamic movement, on a site chosen by Allah Himself. This building was not intended for worship only, as mosques are; its purpose was to act as the center for spreading the universal movement of Islam, a world-wide gathering point for believers in the One God to assemble to worship Allah in congregation and go back to their respective countries carrying with them the message of Islam.

This was the assembly which was named Hajj. Exactly how this center was constructed, with what hopes and prayers both father and son raised its walls, and how Hajj was initiated are described thus in the Qur’an:

The first House ever set up for mankind was indeed that at Bakkah (Makkah), a blessed place, and a guidance unto all beings; wherein are clear signs – the place whereon Ibrahim stood; and whosoever enters it finds peace. (Aal `Imran 3:96, 97)

Have they not seen that We have made the sanctuary immune (from violence), while men are being carried away by force all around them. (Al-`Ankabut 29:67)

Peace always reigned in and around the Ka`bah, when all around it were rampant plunder, murder, devastation, conflict, and warfare – such was its sanctity that even the Bedouins who respected no law, if they detected in its precincts the murderer of even their father, did not dare to touch him.

Look at Ibrahim’s prayers to find out what the real purpose and significance of Hajj is:

And when We made the House (at Makkah) a resort for mankind and sanctuary, (saying): Take as your place of worship the place where Abraham stood (to pray). And We imposed a duty upon Abraham and Ishmael, (saying): Purify My house for those who go around and those who meditate therein and those who bow down and prostrate themselves (in worship), and when Abraham prayed: My Lord! Make this a region of security and bestow upon its people fruits, such of them as believe in Allah and the Last Day…

And remember Abraham and Isma`il raised the foundations of the House (With this prayer): “Our Lord! Accept (this service) from us: For You are the All-Hearing, the All-knowing.

Our Lord! Make of us Muslims, bowing to You, and of our progeny a people Muslim, bowing to You; and show us our place for the celebration of (due) rites; and turn unto us (in Mercy); for You are the Oft-Returning, Most Merciful.

Our Lord! Send amongst them a Messenger of their own, who shall rehearse Thy Signs to them and instruct them in scripture and wisdom, and sanctify them: For Thou art the Exalted in Might, the Wise.” (Al-Baqarah 2:125-129)

And in another surah:

Remember Abraham said: “O my Lord! make this city one of peace and security: and preserve me and my sons from worshipping idols.

O my Lord! They have indeed led astray many among mankind; He then who follows my (ways) is of me, and he that disobeys me,- but You are indeed Oft-forgiving, Most Merciful.

O our Lord! I have made some of my offspring to dwell in a valley without cultivation, by Your Sacred House; in order, O our Lord, that they may establish regular prayer: so fill the hearts of some among men with love towards them, and feed them with fruits: so that they may give thanks.” (Ibrahim 14:35-37)

And when We assigned unto Ibrahim the place of the House, (We said): You shall not take any god beside Me, and purify My House for those who will walk around it and those who will stand, and those who will bow down and prostrate themselves. And proclaim unto mankind the Pilgrimage; and they will come unto you on foot and on every lean mount, they will come from every deep ravine, so that they may witness things that are of benefit to them, and mention God’s name during the days appointed over such heads of cattle He has provided them. Eat, then, thereof, and feed therewith the unfortunate poor. (Al-Hajj 22:26-28)

Brothers in Islam! This is the story of the beginning of that Hajj which is the fifth pillar of Islam. You now understand that Makkah was the headquarters for the mission of the first Prophet appointed to propagate the message of Islam.

The Ka`bah was the focal point from where this preaching was spread across the world, and the worship rites of Hajj were introduced so that all those who chose to live in surrender to God alone should belong to one center where they could assemble every year, and go around it again and again. Their lives of faith were to be like the wheel tied to and revolving around its axle.

The article is an excerpt from Abul A`la Al-Mawdudi’s book “Let Us Be Muslims”.

Abul A`la Mawdudi (1903-1979) was one of the most eminent Islamic thinkers, reformers, and scholars of the 20th century. Mawdudi’s thought has spread all over the world and greatly influenced the work of Islamic da`wah. As a revivalist leader, theologian and political philosopher, his books and articles covered most topics that needed guidance for the revival of Islam. He also wrote many articles on the critique of the Western thought and strategy of Islamic da`wah.