The Wisdom of Sujud Al-Tilawa (the Prostration of Recitation)

The prostration of recitation is one of the Prophetic practices and it is thus called as it relates to the recitation of the Quran. It is an act of worship that is ordained by Allah and His Messenger to be done when reciting the verses of the Quran or listening to them, as a means of drawing near to Allah, subjecting oneself to His Majesty and showing submissiveness to Him. 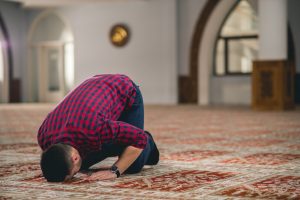 There are 15 verses of the Gracious Quran the Prophet (PBUH) prostrated upon reciting. Muslims are recommended to do the same during and outside the prayer.

This act of prostration is enacted as an act of the Sunnah (Prophetic Tradition) for both the one who recites and the one who listens to the Quran. Scholars unanimously agree on its legality. Ibn ‘Umar (may Allah be pleased with him) said:

“When the Prophet (PBUH) recited a sura of the Quran that contained the prostration, he would prostrate and we would do the same and some of us (because of the heavy rush) could not find a place for prostration.” (Related by Al-Bukhari and Muslim)

Imam Ibnul-Qayyim, the great scholar (may Allah have mercy on him), said, “Positions of prostrations are what is reported to us and what is commanded for us to do.” That is, Allah tells us about the prostration of His creatures generally or at specific situations. So it is enacted, for the one who recites the Qur’an and the one who listens to it, to act like them (Allah’s creatures) when reciting or listening to the verses of prostration, and with greater reason the verses that actually command prostrating.

Abu Hurayrah (may Allah be pleased with him) narrated as a marfu’ (traceable) hadith that the Prophet (PBUH) said:

Who May Perform Sujud Al-Tilawa?

Al-Bukhari related: ‘Uthman (may Allah be pleased with him) passed by a reciter who recited a verse involving prostration to make ‘Uthman perform prostration along with him, but ‘Uthman did not perform prostration and said, “The prostration should be performed by him who listens to it.” There was other Companions who were reported to have done the same.

How Many Suras That Contain Verses of Prostration?

The suras of the Quran that involve verses of prostration are Surat Al-A’raf(the Heights), Surat Al-Ra’d (the Thunder), Surat Al-Nahl (the Bees), Surat Al-Isra’ (the Night journey), Surat Maryam (Mary), Surat Al-Hajj (the Pilgrimage), Surat Al-Furqan (the Criterion), Surat Al-Naml (the Ants), Surat Al-Sajdah (the Prostration), Surat Fussilat (the Lucidly Distinct), Surat Al-Najm (the Stars), Al-Inshiqaq (the Rending), and Al-‘Alaq (the Clinging Clot). Concerning the prostration in the Sura of Sad, there is disagreement between scholars, whether it is a prostration of thankfulness or recitation; and Allah knows best.

How to Perform the Prostration of Recitation?

On performing the prostration of recitation, one should pronounce takbir (saying, “Allahu-Akbar” i.e. “Allah is the Greatest”). This act is stated according to the Hadith of Ibn ‘ Umar in which he said:

“Allah’s Messenger (PBUH) used to recite the Quran to us and whenever he recited a verse that contained a prostration, he used to say takbir and prostrate, and we also used to prostrate along with him. (Related by Abu Dawud)

One should say in prostration, “Subhana Rabbiyal-A’la” (Glory be to my Lord, the Most High), the same as one says when prostrating during performing prayer. If one says, “My face has prostrated before Allah, Who created and fashioned it, created in it hearing and vision by His Power and Might, O Allah! Reward me for it (the act of prostration), remove sins from me by it, reserve it for me, and accept it from me as You did from Your servant Dawud (David),” it will be acceptable. To perform the prostration of recitation from the position of standing is better than performing it while sitting.

O Muslim, you should know that there are many ways of doing good acts, so make your best to follow them, and be loyal and faithful in both actions and words, that Allah may record you among the happy people.