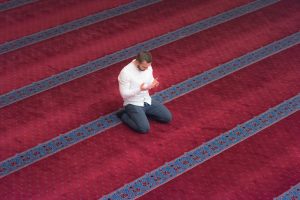 The more one performs supererogatory acts of worship, the more beloved by Allah he or she is.

Between every Adhan (the call to prayer) and Iqamah (the second call to prayer), it is recommended to perform two rak’ahs (units of prayer) or more. Muslims perform them individually before the congregational prayer.

Before and after the obligatory congregational Noon prayer, there are supererogatory prayers which are regarded as sunnah mu’akkadah, whose performance is stressed or highly recommended.

There are reports or hadiths that denote that one is recommended to perform two rak’ahs and others denoting that they are four. Ibn ‘Umar (May Allah be pleased with them) reported:

I performed with the Messenger of Allah (ﷺ) two rak’ahs before and two after Dhuhr prayer. (Al-Bukhari and Muslim)

Scholars hold different opinions concerning how to reconcile both hadiths. To act according to both hadiths, some scholars give preference to the hadith related by ‘A’ishah (Allah be pleased with her). However, others prefer to perform sometimes four rak’ahs and sometimes two. This latter opinion is more preferred as both hadiths mentioned above are authentic.

The person can make them up after al-Dhuhr Prayer as this time is not one when prayer is reprehensible.

The Prophet (ﷺ) said: The gates of heaven are opened for four rak’ahs containing no taslim (salutation) before the noon prayer. (Abu Dawud and Ibn Majah)

However, the early scholars of hadith are in agreement that this hadith is weak. There is also another hadith which supports the other opinion. Ibn ‘Umar narrated that the Messenger of Allah (ﷺ) said:

“Prayers at night and during the day are to be offered two by two.” (Abu Dawud, Al-Tirmidhi, Al-Nasa’I and Ibn Majah)

After relating this hadith, Al-Tirmidhi pointed out that the words “during the day” in this hadith are shadhah (anomalous). He added that the majority of scholars of Hadith had related it without these words.

In sum, a Muslim can choose either to perform four rak’ahs or to perform two ending them with taslim then performing another two separately.

The famous hadiths found in Al-Bukhari and Muslim indicate that the supererogatory prayer after the congregational prayer of Al-Dhuhr are only two rak’ahs. The following hadith which state that they are four is not authentic. Umm Habibah narrated that:

Allah’s Messenger (S) said: “Whoever prays four before al-Dhuhr and four after, Allah makes him prohibited for the Fire.” (Al-Tirmidhi and Al-Nasa’i)

Some scholars hold the opinion that the supererogatory prayer before al-‘Asr is four rak’ahs. To support their opinion they quote the following hadith: Ibn ‘Umar (May Allah be pleased with them) reported:

The Prophet (ﷺ) said, “May Allah have mercy on a man who performs four rak’ahs before the ‘Asr Prayer.” (Abu Dawud and Al-Tirmidhi)

However, scholars of hadith are of the opinion that the hadiths stating that the supererogatory prayer before al-‘Asr is four are not authentic.

This does not mean the person may not perform supererogatory prayer before the obligatory congregational prayer of al-‘Asr. The following hadith is a proof to the contrary:

‘Abdullah bin Mughaffal (May Allah be pleased with him) reported:

According to this hadith, the person may perform voluntary prayer. This prayer is regarded as sunnah ghair mu’akkadah, whose performance is less recommended or not stressed.

Scholars are in agreement that a person cannot perform supererogatory prayers after the al-‘Asr Prayer except in the case of making up a missed prayer. Um Salamah (Allah be pleased with her) said, “I sent a slave-girl to Prophet Muhammad (PBUH) asking her to stand by his side and say to him that Umm Salama says:

Messenger of Allah, I heard you prohibiting these two rak’ahs, whereas I saw you observing them; and if he (the Holy Prophet) points with his hand (to wait), then do wait.

The slave-girl did like that. He (the Holy Prophet) pointed out with his hand and she got aside and waited, and when he had finished (the prayer) he said:

O Daughter of Abu Umayya! You have asked about the two rak’ahs after the ‘Asr prayer. Some people of ‘Abd al-Qais came to me for embracing Islam and hindered me from observing the two rak’ahs which come after the noon prayer. So those are the two I have been praying. (Al-Bukhari and Muslim)

The Prophet (ﷺ) said, “Pray before the Maghrib (compulsory) prayer.” He (said it thrice) and in the third time, he said, “Whoever wants to offer it can do so.” He said so because he did not like the people to take it as a tradition. (Al-Bukhari)

What verses to recite during the two supererogatory rak’ahs of Al-Maghrib?

Also the prayars performed here between Adhan and Iqamah are sunnah ghair mu’akkadah. On the other hand, it is sunnah mu’akkadah to perform two rak’ahs after al-‘Isha’ Prayer.

In short, the following two hadiths summarizes the supererogatory prayers a Muslim is recommended to perform before and/ or after the five obligatory prayers.

Ibn ‘Umar (May Allah be pleased with them) reported:

‘Aishah (May Allah be pleased with her) reported: