After a day full of work, worship, and entertainment, the people of Makkah fell into a deep sleep.

The people of the Quraish were turning in their beds except for one who forsook his bed of sleep. He used to go to bed early, rest for a few hours, then wake up in great anxiety for the expected appointment with Allah. He went to the praying corner in his room to supplicate to his God. 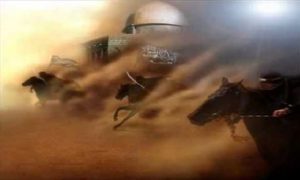 Hamzah was not only physically strong, but was also wise and strong-willed.

Whenever his wife awakened upon hearing the voice of his long supplications, she shed tears out of warm sympathy and asked him not to take it so hard and to get some sleep. He only answered her in tears, ”The time for sleep is over, khadijah.”

At that time Muhammad was not yet a serious problem for the Quraish, although he had started to draw their attention as he started to spread his call secretly; those who believed in him were still quite few.

There were people among the non-believers who loved and respected him. They yearned to declare their belief in him and become one of his followers, but their fear of the prevailing norms and the pressure of inherited traditions prevented them. Among them was Hamzah lbn `Abdul-Muttalib, the Prophet’s paternal uncle who was at the same time his brother through fosterage (i.e. they had been breast-fed by the same woman).

Hamzah was fully aware of the greatness of his nephew and of the truth he came with. He used to know him not only as a nephew, but also as a brother and friend because they both belonged to the same generation.

They always played together and walked together on the same road of life step by step. But in their youth they departed, each one in his own way: Hamzah preferred the life of leisure, trying to take his place among the prominent leaders of the Quraish and Makkah, while Muhammad chose the life of seclusion away from the crowd, immersed in the deep spiritual meditation that prepared him to receive the truth.

Despite the fact that each of them had a different way of living out his own youth, Hamzah was always attentive to the virtues of his friend and nephew. Such virtues helped Muhammad to win a special place in the hearts of people and helped to draw a clear outline for his great future.

The next day, Hamzah went out as usual. At the Ka`bah he found a number of Quraishi noblemen. He sat with them, listening to what they had to say: they were talking about Muhammad.

For the first time Hamzah saw them worried about the call his nephew was propagating with a tone of bitterness and rage marking their voices. Before that, they had never paid attention – at least they had pretended not to do so – but on that day their faces looked perplexed, upset, and aggressive.

Hamzah laughed at their talks and accused them of exaggeration. Abu Jahl said to his companions that Hamzah was the best one to know the danger of his nephew’s call and that he pretended to underestimate this danger till the Quraish would relax so much that when they awakened it would be after his nephew had complete control over them.

They kept talking and threatening while Hamzah sat, sometimes smiling, sometimes frowning. When they dispersed his head was full of new ideas about the issues of his nephew that they had discussed in his presence.

Days passed and the Quraish’s whispering about the Prophet’s call increased. Later, whispering turned into provocation and Hamzah watched from a distance. His nephew’s composed, steadfast attitude towards their provocations puzzled him. Such an attitude was quite unfamiliar to the Bani Quraish, who were themselves known to be strong and challenging.

If doubts of the greatness and truth of Muhammad could steal into anyone’s heart, they would have never stolen into Hamzah’s heart, because he was the best one to know Muhammad from his early childhood to his youth, then to his proud, honest manhood. Hamzah knew Muhammad as he knew himself and maybe more.

Since they had come into life together, grown up together, and attained full strength together, Muhammad’s life had been as pure and clear as the sunlight. It never occurred to Hamzah that Muhammad could make an error or a doubtful act in his life. He never saw Muhammad angry, hopeless , greedy, careless, or unstable.

Hamzah was not only physically strong, but was also wise and strong-willed.

Therefore, it was natural for him to follow a man in whose honesty and truthfulness he wholeheartedly believed. Thus he kept a secret in his heart that was soon going to be disclosed.

Then came the day. Hamzah went out of his house towards the desert carrying his bow to practice his favorite sport of hunting (in which he was very skilled). He spent most of his day there. On his way home he passed by the Ka`bah as usual, to circumambulate it.

Near the Ka`bah, a female servant of `Abdullah lbn Jud`an saw him and said, “O Abu `Umarah!

You haven’t seen what happened to your nephew at the hands of Abu Al-Hakam ibn Hisham. When he saw Muhammad sitting there, he hurt him and called him bad names and treated him in a way that he hated.”

She went on to explain what Abu Jahl had done to the Prophet of Allah. Hamzah listened to her carefully and paused for a while, then with his right hand he picked up his bow and put it on his shoulder. He walked with fast, steady steps towards the Ka`bah, hoping to meet Abu Jahl there. He decided that if he did not find him, he would search for him everywhere till he did.

As soon as he reached the Ka`bah he glanced at Abu Jahl sitting in the yard in the middle of the Quraishi noblemen. Hamzah advanced very calmly towards Abu Jahl and hit him with his bow on the head till it broke the skin and bled. To everybody’s surprise, Hamzah shouted, “You dare to insult Muhammad while I follow his religion and I say what he says? Come and retaliate upon me. Hit me if you can.”

In a moment they all forgot how their leader Abu Jahl had been insulted and they were all thunderstruck by the news that Hamzah had converted to Muhammad’s religion and that he saw what Muhammad saw and said what he said. Could Hamzah really have converted to Islam when he was the strongest and most dignified Quraishi young man?

Such was the overwhelming disaster to which the Quraish were helpless, because Hamzah’s conversion would attract others from the elite to do the same. Thus Muhammad’s call would be supported, and he would find enough solidarity that the Quraish might wake up one day to find their idols being pulled down. Indeed, Hamzah had converted, and he announced what he had kept secret in his heart for so long.

Again Hamzah picked up his bow, put it on his shoulder, and with steady steps and full strength left the place with everyone looking disappointed and Abu Jahl licking the blood flowing from his wounded head.

Hamzah possessed a sharp sight and dear consciousness. He went home, and after he had relaxed from the day’s exhaustion he sat down to think over what had happened. He had announced it in a moment of indignation and rage. He hated to see his nephew getting insulted and suffering injustice with no one to help him.

Such racial zeal for the honor of Bani Hashim’s talk had made him hit Abu Jahl on the head and shout declaring his Islam. But was that the ideal way for anyone to change the religion of his parents and ancestors and to embrace a new religion whose teachings he had not yet become familiar with and whose true reality he had not acquired sufficient knowledge of?

It was true that Hamzah had never had any doubts about Muhammad’s integrity, but could anybody embrace a new religion with all its responsibilities just in a moment of rage as Hamzah had done?

It was true that he had always kept in his heart a great respect for the new call his nephew was carrying and its banner, but what should the right time have been to embrace this religion if he was destined to embrace it? Should it be a moment of indignation and anger or a moment of deep reflection?

Thus he was inspired by a clear consciousness to reconsider the whole situation in light of strict and meticulous thinking.

Hamzah started thinking. He spent many restless days and sleepless nights. When one tries to attain the truth by the power of mind, uncertainty will become a means of knowledge, and this is what happened to Hamzah.

Once he used his mind to search Islam and to weigh between the old religion and the new one, he started to have doubts raised by his innate inherited nostalgia for his father’s religion and by the natural fear of anything new. All his memories of the Ka`bah, the idols, the statues and the high religious status these idols bestowed on the Quraish and Makkah were raised.

It appeared to him that denying all this history and the ancient religion was like a big chasm which had to be crossed. Hamzah was amazed at how a man could depart from the religion of his father that early and that fast. He regretted what he had done but he went on with the journey of reasonable thinking.

But at that moment, he realized that his mind was not enough and that he should resort sincerely to the unseen power. At the Ka`bah he prayed and supplicated to heaven, seeking help from every light that existed in the universe to be guided to the right path.

Let us hear him narrating his own story: “I regretted having departed from the religion of my father and kin, and I was in a terrible state of uncertainty and could not sleep. I came to the Ka`bah and supplicated to Allah to open my heart to what was right and to eliminate all doubts from it. Allah answered my prayer and filled my heart with faith and certainty. In the morning I went to the Prophet (peace be upon him) informing him about myself, and he prayed to Allah that He may keep my heart stable in this religion.

In this way Hamzah converted to Islam, the religion of certainty.

The article is excerpted from the book Men Around the Messenger, which is a translation based on Khalid Muhammad Khalid’s celebrated work in Arabic “Rijal Hawla Ar-Rasul” which represents the real inspirational stories of sixty-four Companions of the Prophet.

Khalid Muhammad Khalid (1920-1996) is a modern Egyptian Muslim thinker. He is most known for his book Rijal Hawla al-Rasul (Men Around the Messenger). He wrote many books about the life and the companions of the Prophet, peace be upon him.